Legacy of a 60 Year Old Meltdown

Journalist Harvey Wasserman and Denise Duffield, Associate Director of Physicians for Social Responsibility- L.A. discussed the  Woolsey Fire, its implications, and the California and corporate refusals to clean-up the SSFL site, endangering residents daily, in these excerpts from the December 2018 meeting of Americans for Democratic Action – Southern California, in Culver City.

The Woolsey fire started at the Santa Susana Field Laboratory site, and based on helicopter sightings, was likely started by a transformer malfunction and fire at a Southern California Edison substation located there.

A statement released by the California Dept. of Toxic Substances Control (DTSC) said that its staff, “do not believe the fire has caused any releases of hazardous materials that would pose a risk to people exposed to the smoke.” The statement failed to assuage community concerns given DTSC’s longtime pattern of misinformation about SSFL’s contamination and its repeated broken promises to clean it up.

“We can’t trust anything that DTSC says,” said West Hills resident Melissa Bumstead, whose young daughter has twice survived leukemia that she blames on SSFL and who has mapped 50 other cases of rare pediatric cancers near the site. Bumstead organized a group called “Parents vs. SSFL” and launched a Change.org petition demanding full cleanup of SSFL that has been signed by over 410,000 people. “DTSC repeatedly minimizes risk from SSFL and has broken every promise it ever made about the SSFL cleanup. Communities throughout the state have also been failed by DTSC. The public has no confidence in this troubled agency,” said Bumstead.

END_OF_DOCUMENT_TOKEN_TO_BE_REPLACED

“From the very beginning, the federal government has refused to take responsibility,”  — Sen. Tom Udall

From Beyond Nuclear International

When Barbara Kent was twelve years old she went away to dance camp. It was July 1945. A dozen young girls were enjoying a summer retreat, sleeping together in a cabin, and sharing their love of dance. On July 16 they danced with something deadly.

After being jolted unexpectedly out of bed, they went outside pre-dawn when it should have been dark, to find it bright as day with a strange white ash falling like snowflakes. “Winter in July,” Kent, now 86 years old, has called it.

The girls rubbed the “snowflakes” on their bodies and caught them with their tongues. Before they all turned 40, 10 of the 12 girls had died.

No one had warned the girls, or their teacher, or anyone in the community, that the US government had just exploded the first atomic bomb a little more than 50 miles away at the Alamogordo Bombing and Gunnery Range in New Mexico, now known as the Trinity Test Site. The “snowflakes” were deadly radioactive fallout and just the beginning of an endless — and likely permanent — cycle of disease, death and deprivation.

“While it was not the end of the world, it was the beginning of the end for so many people,” said Tina Cordova, co-founder of the Tularosa Basin Downwinders Consortium, an organization that “seeks justice for the unknowing, unwilling and uncompensated participants of the July 16, 1945 Trinity test in southern New Mexico.”

Uncompensated because, even though the Trinity atomic bomb was detonated in New Mexico, and for no reason that anyone has yet ascertained, the people of New Mexico dosed by the fallout have never been acknowledged or officially recognized by the federal government as downwinders.

That is why, for the past eight years, first as a US congressman and now as a member of the US Senate, Tom Udall (D-NM) has been fighting for the Trinity downwinders in his state to be included in the Radiation Exposure Compensation Act that, since the law’s inception in 1990, and even after it was amended in 2000, has failed, among others, to include New Mexico victims of the Trinity test.

On June 26, 2018, a hearing finally took place before the US Senate Judiciary Committee, at which Udall and many victims of exposure to radioactive fallout and uranium mining — on the Navajo Nation, in Idaho, New Mexico and even Guam — testified. All of them asked that RECA be amended once again to include those forgotten, ignored and affected, even though in many ways it is coming seventy three years too late.

“People sometimes ask me, ‘why don’t you just move?’” said Cordova when we talked after the Hill hearing. “Well the only safe day to move was July 15, 1945.”

END_OF_DOCUMENT_TOKEN_TO_BE_REPLACED

Hot Property…in More Ways than One.
Hunters Point is being touted as San Francisco’s biggest
redevelopment since the 1906 earthquake.

San Francisco currently has a severe case of real estate fever,
pricing all but the rich out of its new housing market. The city’s poorest quarter, Bayview-Hunters Point in its southeast corner, is the latest epicenter of development mania. But, there is a big problem.

The Hunters Point Naval Shipyard hosted nuclear weapons work, including supposed decontamination of Navy ships used in Pacific hydrogen bomb tests–which left the shipyard with ultra-high radioactivity. It has been an EPA Superfund site since 1989.

Now, this nearly 30-year radiation cleanup has run off the tracks. PEER has obtained documents showing that the remaining contamination is far, far worse than previously reported:
• Almost 100% of the soil samples taken by the U.S. Navy’s contractor Tetra Tech re-examined by the  EPA are “falsified,” subject to deliberate manipulation and “neither reliable nor defensible”;
• Parcels transferred to San Francisco under false pretenses as suitable remain deeply contaminated; and
• Most every Tetra Tech radiation survey on the shipyard’s buildings is bogus.

One of the things that makes these findings so remarkable is that the Navy was on notice for years that it had a major data meltdown on its hands yet is still trying to cook the books. Of course, neither the Navy nor EPA revealed any of this. There are still more shoes to drop and we intend to make Hunters Point the poster child for meaningful Superfund reform.

Don’t Eat the Tomatoes
In areas of Hunters Point certified as clean, residents are subject to
a curious covenant: they may not grow food unless they import
soil. This raises the question of what is meant by “clean.” It is especially important with respect to radiation, a pollutant that keeps
on giving.

Posted under Fair Use Rules

From Beyond Nuclear Internatiional
July 16, 2018

The uranium tailings spill at Church Rock, NM was the largest single release of radioactive contamination in US history

On July 16, 1979,  the worst accidental release of radioactive waste in U.S. history happened at the Church Rock uranium mine and mill site. While the Three Mile Island accident (that same year) is well known, the enormous radioactive spill in New Mexico has been kept quiet. It is the U.S. nuclear accident that almost no one knows about.

Just 14 weeks after the Three Mile Island reactor accident, and 34 years to the day after the Trinity atomic test, the small community of Church Rock, New Mexico became the scene of another nuclear tragedy.

No one knows exactly how much radioactivity was released into the air during the Three Mile Island accident. The site monitors were shut down after their measurements of radioactive releases went off the scale.

But the American public knows even less about the Church Rock spill and, five weeks after it occurred, the mine and mill operator, United Nuclear Corporation (UNC), was back in business as if nothing had happened. Today, the Church Rock accident is acknowledged as likely the largest single release of radioactive contamination ever to take place in U.S. history (outside of the atomic bomb tests).

Why is the Church Rock spill – that washed into gullies, contaminated fields and the animals that grazed there, and made drinking water deadly – so anonymous in the annals of our nuclear history? Perhaps the answer lies in where it took place and who it affected.

Church Rock was a small farming community of Native Americans, mainly Navajo, eking out a subsistence living off the arid Southwestern land. Nearby, several hundred million gallons of liquid uranium mill tailings were sitting in a pond waiting for evaporation to leave behind solid tailings for storage. On the morning of July 16, 1979, part of the dam wall collapsed, releasing a roaring flood of radioactive water and sludge.

END_OF_DOCUMENT_TOKEN_TO_BE_REPLACED 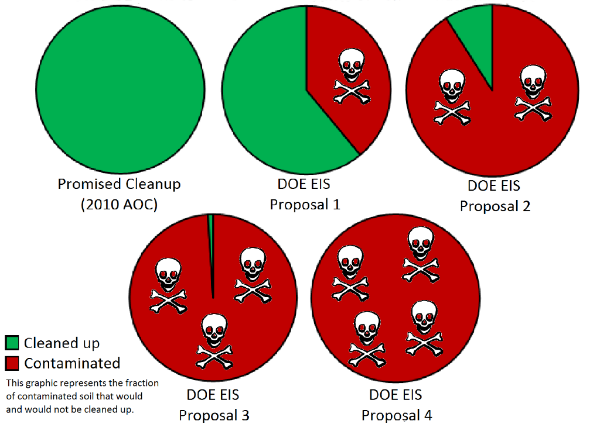