From Beyond Nuclear Internatiional
July 16, 2018 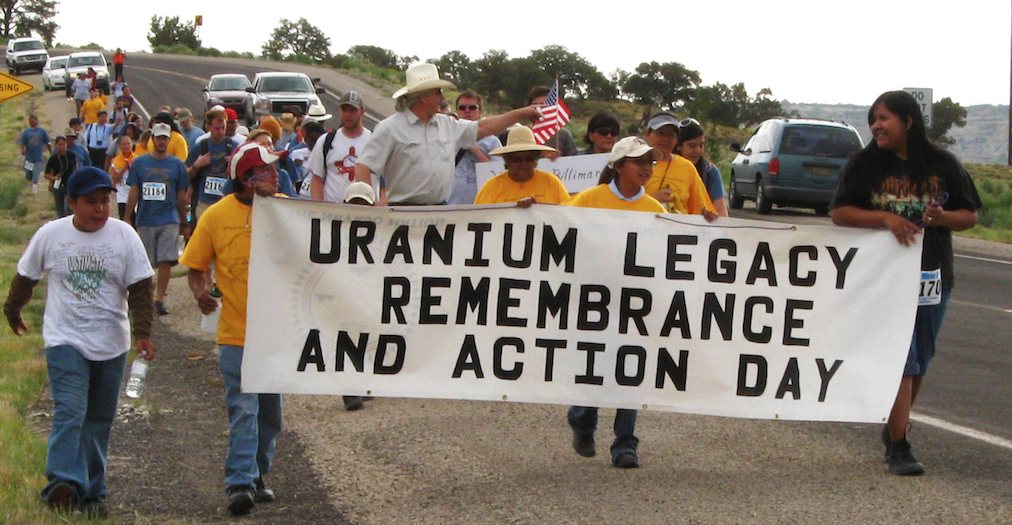 The uranium tailings spill at Church Rock, NM was the largest single release of radioactive contamination in US history

On July 16, 1979,  the worst accidental release of radioactive waste in U.S. history happened at the Church Rock uranium mine and mill site. While the Three Mile Island accident (that same year) is well known, the enormous radioactive spill in New Mexico has been kept quiet. It is the U.S. nuclear accident that almost no one knows about.

Just 14 weeks after the Three Mile Island reactor accident, and 34 years to the day after the Trinity atomic test, the small community of Church Rock, New Mexico became the scene of another nuclear tragedy.

No one knows exactly how much radioactivity was released into the air during the Three Mile Island accident. The site monitors were shut down after their measurements of radioactive releases went off the scale.

But the American public knows even less about the Church Rock spill and, five weeks after it occurred, the mine and mill operator, United Nuclear Corporation (UNC), was back in business as if nothing had happened. Today, the Church Rock accident is acknowledged as likely the largest single release of radioactive contamination ever to take place in U.S. history (outside of the atomic bomb tests).

Why is the Church Rock spill – that washed into gullies, contaminated fields and the animals that grazed there, and made drinking water deadly – so anonymous in the annals of our nuclear history? Perhaps the answer lies in where it took place and who it affected.

Church Rock was a small farming community of Native Americans, mainly Navajo, eking out a subsistence living off the arid Southwestern land. Nearby, several hundred million gallons of liquid uranium mill tailings were sitting in a pond waiting for evaporation to leave behind solid tailings for storage. On the morning of July 16, 1979, part of the dam wall collapsed, releasing a roaring flood of radioactive water and sludge.

END_OF_DOCUMENT_TOKEN_TO_BE_REPLACED

Feds reach settlement with Navajos over uranium mine cleanup

ALBUQUERQUE, N.M. — The federal government has reached another settlement with the Navajo Nation that will clear the way for cleanup work to continue at abandoned uranium mines across the largest American Indian reservation in the U.S.

The target includes 46 sites that have been identified as priorities due to radiation levels, their proximity to people and the threat of contamination spreading. Cleanup is supposed to be done at 16 abandoned mines while evaluations are planned for another 30 sites and studies will be done at two more to see if water supplies have been compromised.

The agreement announced by the U.S. Justice Department settles the tribe’s claims over the costs of engineering evaluations and cleanups at the mines.

The federal government has already spent $100 million to address abandoned mines on Navajo lands and a separate settlement reached with DOJ last year was worth more than $13 million. However, estimates for the future costs for cleanup at priority sites stretch into the hundreds of millions of dollars.

Officials with the U.S. Environmental Protection Agency could not immediately pinpoint the worth of the latest settlement.

Assistant Attorney General John C. Cruden, who is with the DOJ’s Environment and Natural Resources Division, said the latest settlement marks the second phase of ensuring cleanup of mines that pose the most significant public health risks.

“Addressing the legacy of uranium mining on Navajo lands reflects the commitment of the Justice Department and the Obama administration to fairly and honorably resolve the historic grievances of American Indian tribes and build a healthier future for their people,” Cruden said in a statement.

Navajo leaders have been pushing for cleanup for decades, specifically for the removal of contaminated soils and other materials rather than burying and capping the waste on tribal land. Since 2005, they’ve had a ban on uranium mining.

Over four decades, some 4 million tons of uranium ore were extracted from mines on Navajo lands with the federal government being the sole purchaser from the 1940s through the 1960s, when commercial sales began. The mining operations stretched from western New Mexico into Arizona and southern Utah.

Decades of uranium mining have left behind a legacy of contamination that includes one of the nation’s worst disasters involving radioactive waste: a spill in the Church Rock area that sent more than 1,100 tons of mining waste and millions of gallons of toxic water into an arroyo and downstream to the Rio Puerco. The result was a Superfund declaration.

Advocates have called for more studies on the health effects of continued exposure to the contamination resulting from the mining sites, and some have criticized the slow pace of cleanup and the lack of adequate funding for the work that needs to be done.

In a report submitted to New Mexico lawmakers last year, a team of consultants estimated it would take EPA more than a century to fund the removal of contamination at just 21 of the highest priority sites.

EPA officials say in the last decade, the agency has remediated nearly four dozen homes, conducted field studies at all 523 mines on Navajo lands and provided safe drinking water to more than 3,000 families. Stabilization and cleanup work also has been done at nine abandoned mines.

Feds reach settlement with Navajos over uranium mine cleanup

Containers filled with radioactive waste continue to stack up in the desert west of Idaho Falls.

There are nearly 20,000 steel drums filled with the transuranic waste, waiting to find a permanent resting place. The waste is in a holding pattern as a New Mexico nuclear waste repository slowly recovers from a pair of 2014 accidents.

But DOE officials said there is still much uncertainty about when Idaho will be cleared to begin shipping out its growing stockpile of waste. That’s because even when the repository known as WIPP reopens, it’s still not expected to be back at full strength for several more years as additional repairs are made. In addition, other federal facilities around the country will be hoping to send their growing waste collections all at once, too, creating a bottleneck.

“I think it’s fair to say that once does WIPP does resume operations, it will be at a much slower pace than what we were accustomed to before the shutdown,” said Brad Bugger, a supervisor at DOE’s Idaho Operations Office.

That continued uncertainty about when the waste will leave Idaho has led to new concerns that the DOE will miss another state-mandated cleanup milestone in the 1995 Settlement Agreement. The agreement said the transuranic waste — which continues to be slowly uncovered and repackaged at the desert site — needs to be gone from the state by the end of 2018.

“It’s going to be a challenge,” to meet the deadline, said Susan Burke, INL coordinator for the Idaho Department of Environmental Quality. She added that continuing to process and package the waste into drums — even if it can’t yet be shipped outside Idaho — is still safer for the environment and human health than leaving it in place.

The waste includes tools, rags, clothing, sludge and dirt — anything contaminated with a transuranic element such as plutonium. Most of it came from the now-closed Rocky Flats Plant outside Denver, where nuclear weapon components were made.

Truckloads of waste, held in wooden and fiberglass boxes and metal drums, were shipped to the site in the 1970s and ’80s, where it was dumped and covered over with dirt. For years DOE cleanup contractors have been working to carefully clean up the mess that was left behind.

In a recent interview, Idaho Attorney General Lawrence Wasden said he is keeping an eye on the approaching 2018 deadline. DOE is already out of compliance with the Settlement Agreement due to liquid waste that was supposed to be treated by 2012. The department also is in violation of a Settlement Agreement requirement to ship a running average of 2,000 cubic meters of transuranic waste out of the state each year.

“I certainly believe we have time right now if the Department of Energy is willing — and we’re trying to engage them in conversation about that 2018 deadline — that we can find a way to resolve some of that,” Wasden said. “One of those (ways to resolve the problem) would be to have a prioritization of shipments to WIPP once it is open.”