“From the very beginning, the federal government has refused to take responsibility,”  — Sen. Tom Udall

From Beyond Nuclear International 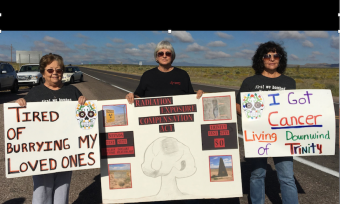 When Barbara Kent was twelve years old she went away to dance camp. It was July 1945. A dozen young girls were enjoying a summer retreat, sleeping together in a cabin, and sharing their love of dance. On July 16 they danced with something deadly.

After being jolted unexpectedly out of bed, they went outside pre-dawn when it should have been dark, to find it bright as day with a strange white ash falling like snowflakes. “Winter in July,” Kent, now 86 years old, has called it.

The girls rubbed the “snowflakes” on their bodies and caught them with their tongues. Before they all turned 40, 10 of the 12 girls had died.

No one had warned the girls, or their teacher, or anyone in the community, that the US government had just exploded the first atomic bomb a little more than 50 miles away at the Alamogordo Bombing and Gunnery Range in New Mexico, now known as the Trinity Test Site. The “snowflakes” were deadly radioactive fallout and just the beginning of an endless — and likely permanent — cycle of disease, death and deprivation.

“While it was not the end of the world, it was the beginning of the end for so many people,” said Tina Cordova, co-founder of the Tularosa Basin Downwinders Consortium, an organization that “seeks justice for the unknowing, unwilling and uncompensated participants of the July 16, 1945 Trinity test in southern New Mexico.”

Uncompensated because, even though the Trinity atomic bomb was detonated in New Mexico, and for no reason that anyone has yet ascertained, the people of New Mexico dosed by the fallout have never been acknowledged or officially recognized by the federal government as downwinders.

That is why, for the past eight years, first as a US congressman and now as a member of the US Senate, Tom Udall (D-NM) has been fighting for the Trinity downwinders in his state to be included in the Radiation Exposure Compensation Act that, since the law’s inception in 1990, and even after it was amended in 2000, has failed, among others, to include New Mexico victims of the Trinity test.

On June 26, 2018, a hearing finally took place before the US Senate Judiciary Committee, at which Udall and many victims of exposure to radioactive fallout and uranium mining — on the Navajo Nation, in Idaho, New Mexico and even Guam — testified. All of them asked that RECA be amended once again to include those forgotten, ignored and affected, even though in many ways it is coming seventy three years too late.

“People sometimes ask me, ‘why don’t you just move?’” said Cordova when we talked after the Hill hearing. “Well the only safe day to move was July 15, 1945.”