Sen. James Inhofe, S. 2795: “The existing fleet of nuclear reactors in the United States is operating safely and securely.“

It is perfectly possible that Inhofe, Booker, Crapo et. al. are simply lazy, stupid and ignorant in pushing a bill (S. 2795) claiming that US nuclear reactors are “operating safely and securely”. Maybe they’ve just observed that the US NRC does exactly what the nuclear industry wants anyway so should indeed have funding cut. It is actually pretty funny that all the workers at US NRC that have sold their soul to the nuclear devil have their jobs on the cutting block anyway. So, the proposal to cut funding to the US NRC is actually pretty funny. Watch and learn before you sell your soul to the devil. However, many NRC workers will just go home to their countries of origin, leaving the children of the American Revolution and others who have no other home stuck with their nuclear crimes. But, why not just totally shut down the US NRC?

According to the idiotic statement in the Senator Inhofe sponsored bill S2795, “the existing fleet of nuclear reactors in the United States is operating safely and securely;…” (S.2795 — 114th Congress https://www.congress.gov/bill/114th-congress/senate-bill/2795/all-actions?resultIndex=3&overview=closed Sponsor: Sen. Inhofe, James M. [R-OK]). Inhofe and his co-sponsors can’t read? The list of safety related problems-“incidents” reported to the US NRC appears endless: http://www.nrc.gov/reading-rm/doc-collections/event-status/event/

http://www.c-span.org/video/?408515-1/hearing-nuclear-energy&start=5937 Why is the entire panel pro-nuclear? Read about them at the bottom of this post. Second from the left is Ashley Finan who works for the so-called “ Clean Air Task Force”, but has promoted the use of nuclear power in the Canadian tar sands industry.

The electrical defects for all but one US nuclear power station are so serious that 7 brave NRC electrical engineers put themselves at risk by demanding something be done immediately. They were ignored. These brave seven were led by an American from India who loves America. And, maybe he’s just smart enough to understand that the world environment is interconnected too.

This claim about the safety and security of US Nuclear Power Stations and push for nuclear deregulation is oddly coming from a Senator (Inhofe) from Oklahoma where there are no operating nuclear power stations, though Oklahoma is the location of the infamous Kerr-McGee site where Karen Silkwood worked.

Maybe Inhofe’s bill has to do with his funding related to Honeywell International: https://miningawareness.wordpress.com/2015/08/04/us-nrc-launches-special-inspection-at-honeywell-uranium-hex-facility-in-metropolis-illinois/

And, funding to Inhofe related to Southern Co. with their Vogtle Nuclear Reactors, both old and under construction?https://www.opensecrets.org/politicians/contrib.php?type=C&cid=N00005582&newMem=N&cycle=2016 More overt, of course, is Inhofe’s military industrial complex funding.

END_OF_DOCUMENT_TOKEN_TO_BE_REPLACED

Translation, no public input on licensing.

If it isn’t mandatory, it doesn’t happen.

The industry is pushing nuclear energy as a zero emissions climate solution. Is the next step mandatory nuclear reactors wherever the government and industry deem necessary?

This part discusses the effort by nuclear industry, and their lackeys in the Senate, to do away with mandatory hearings for new reactor types, on the basis of circular logic. Senator Markey stands up for public safety. 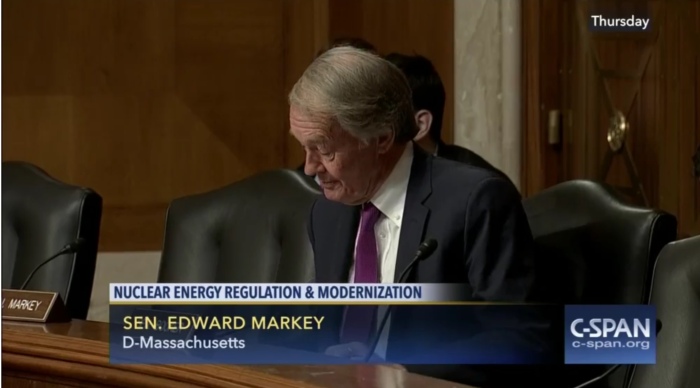 Senator Ed Markey:
“Dr. Lyman, This Bill would scrap the requirement that the NRC hold a mandatory hearing on each application for a construction permit or operating license. Instead, such hearings would only occur if they are requested by a person who’s interest might be effected. Is there any evidence that mandatory hearings have uncovered weaknesses in NRC staff evaluations of construction permits or operating license applications that otherwise would never have come to public view?”

Senator Markey: “And, I agree with you. There are mandatory hearings if you want to build a new house next door to someone else’s house. There’s a public hearing down at town hall. And, here we are building a nuclear power plant and mandatory hearings for a construction permit, for an operating permit would no longer be mandatory? That just makes no sense whatsoever.

That’s an inherently dangerous technology that needs all kinds of tough questions to be asked about it.

So, I understand the wish list of the [nuclear] industry that would say – “No more hearings”, “No more public input”, “No more questions asked by the Union of concern scientists in public hearings questioning the underlying premise of building a nuclear power plant in someone’s neighborhood”.

But, I don’t think the public will be happy that they’re told no hearings on this dangerous technology.

Again it still needs insurance protection from the Federal Government, that’s how inherently dangerous it is. The private sector still isn’t willing to provide the insurance. You need the government to intervene to provide that coverage.”

Senator Markey: “Do you agree that granting safety exemptions to Advance Reactor Licensees could lead to a net reduction in overall safety?”

Ed Lyman: “Yes. Just to elaborate on that concern. The industry is pressing for generic decisions to be made on certain policy issues including the size of emergency planning zones for Advanced Reactors or Small Modular Reactors, the level of security that is needed, whether or not the containment needs to be robust against large pressure increases and whether the number of operators needed to staff a nuclear reactor complex should be reduced.

They want these decisions to be made based on expectation or the assertion that Advanced Reactors are so much safer than current reactors that we don’t need that we don’t need these extra levels of protection. Our concern is that assertion is not always based on a full enough body of evidence and experimental data to justify making those decisions. So there could be a net reduction of safety if exemptions and other relaxations in safety procedures are granted based on a presumption that a new reactor is safer without a full examination of that claim.”

Senator Markey: “So, laced throughout the bill as it is drafted is an assumption that there are inherent safety features built into Advanced design for reactors that make it safer automatically. And, that’s a nice assumption to make, it’s a nice assertion to make but that’s got to be tested. We have to make sure that any one additional potentially successful safety feature interacts with the totality of the rest of the nuclear power plant in terms of them assuming that the plant’s safer. And, we don’t know that. It’s an assumption built into the language of the bill and so this just goes to the question, and it is an 80-20 question.

What are the big issues that we have to deal with here? And 80% of it’s just going to still remain is there enough money for the NRC to do their job? Have enough personnel asking all the right questions? Having the right supervision? The fees are going to be reduced.

Are these new technologies actually inherently safer? We have to have the capacity to be able to determine that.

Will the public be able to ask questions?

The industry’s has always tried to get the public out. But after Three Mile Island, after Chernobyl and after any other number of other incidents, the people don’t trust the experts anymore. They want to be able to ask questions too. Because these power plants are going into their neighborhoods. You can’t wall out whole areas of the country from these questions…

Public input is vital and should actually be strengthened. The new reactors should not be exempted from important safety requirements that historically have been required. And, that the NRC budget should not be capped. So, these are the central areas, the big questions that we are going to have to answer in this legislation. It’s going to keep coming back to the same questions we have been asking for the last seven years on technology. The questions don’t change…”
http://www.c-span.org/video/?408515-1/hearing-nuclear-energy&start=5937

Note that when they say that a “person who’s interest might be effected” might request a hearing, the US NRC appears to have a really narrow definition of that. From our understanding, to get “standing” you apparently need to be within the 50 mile official impact zone. So, if they make the official impact zone smaller based on the “inherent safety” of new reactors then there will be even less opportunity to request a hearing. If the US Senate is not stopped on this, in the end for the SMRs it will probably fall to local zoning ordinances, where they exist.

NB-Disclaimer: This transcript is our own based on the video. The C-Span transcript is really incomplete and inaccurate. They even state that it is “uncorrected”. We do not guarantee that our transcript is perfect, but it is close to perfect. Always listen and compare to the original video if you need a word for word transcript. We are also unable to transcribe Senator Markey’s intonation which is very important here.