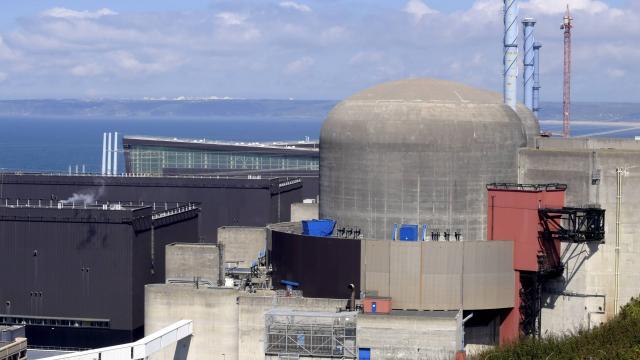 A new review of the safety of France’s nuclear power stations has found that at least 18 of EDF’s units are are ”operating at risk of major accident due to carbon anomalies.”

The review was carried out at the request of Greenpeace France following the discovery of serious metallurgical flaws by French regulators in a reactor vessel at Flamanville, where an EPR plant is under construction.

The problem is that parts of the vessel and its cap contain high levels of carbon, making the metal brittle and potentially subject to catastrophic failure. These key components were provided by French nuclear engineering firm Areva, and forged at its Le Creusot.

“The nature of the flaw in the steel, an excess of carbon, reduces steel toughness and renders the components vulnerable to fast fracture and catastrophic failure putting the NPP at risk of a major radioactive release to the environment”, says nuclear safety expert John Large, whose consultancy Large Associates (LA) carried out the Review.

His report examines how the defects in the Flamanville EPR reactor pressure vessel came about during the manufacturing process, and escaped detection for years after forging. It then goes on to investigate what other safety-critical nuclear components might be suffering from the same defects.

After several months of investigation LA found that critical components of a further 28 nuclear plants were forged by Le Creusot using the same process. These are found in the steam generators – large, pod-like boilers – that have been installed at operational EDF nuclear power stations across France.

The conclusion is based on documents provided by IRSN (the independent French Institut de Radioprotection et de Sûreté Nucléaire) that reject assurances given by both EDF and Areva that there is no safety risk from steam generators containing the excess carbon flaw.

“As a result of Areva’s failures, a significant share of the French nuclear reactor fleet is at increased risk of severe radiological accident, including fuel core meltdown”, said Large. ”However, there is no simple or quick fix to this problem.

“The testing and inspection regime currently underway by Areva and EDF is incapable of detecting the extent and severity of the carbon problem and, moreover, it cannot ensure against the risk of rapid component failure. It is most certain that the IRSN finding will equally applies to replacement steam generators exported by Areva to overseas nuclear power plants around the world.”

EDF stated yesterday that it will carry out further tests on 12 nuclear reactors during their planned outages in the coming months – and that extended periods of outage are to be expected. “There are outages that could take longer than planned”, an EDF spokesman told Reuters.

“In 2015, we discovered the phenomenon of carbon segregation in the Flammanville EPR reactor. We decided to verify other equipments in the French nuclear park to make sure that other components are not impacted by the phenomenon.”

In anticipation of the nuclear closures, year-ahead electricity prices rose in the French wholesale power market, forcing power rises across Europe up to a one-year high.

Meanwhile Moody’s has downgraded EDF credit ratings across a spectrum of credit instruments. EDF’s long-term issuer and senior unsecured ratings fell from A2 to A3 while perpetual junior subordinated debt ratings fell to Baa3 from Baa2. Moody’s also  downgraded the group’s short-term ratings to Prime-2 from Prime-1.

“the rating downgrade reflects its view that the action plan announced by EDF in April 2016, which includes government support, will not be sufficient to fully offset the adverse impact of the incremental risks associated the Hinkley Point C (HPC) project on the group’s credit profile.

“Moody’s believes that the significant scale and complexity of the HPC project will affect the group’s business and financial risk profiles. This is because the HPC project will expose EDF and its partner China General Nuclear Power Corporation (CGN, A3 negative) to significant construction risk as the plant will use the same European Pressurised reactor (EPR) technology that has been linked with material cost overruns and delays at Flamanville in France and Olkiluoto 3 in Finland. In addition, none of the four plants using the EPR technology currently constructed globally is operational yet.”

Once rating agencies have had time to evaluate the seriousness of EDF’s current problems with reactors packed with unsafe crirical components, further downgrades may follow. “The ratings could be downgraded if (1) credit metrics fall below Moody’s guidance for the A3 rating; or (2) EDF were to be significantly exposed to AREVA NP’s liabilities”, the agency warns.

Flamanville EPR heading for the scrapheap

The Review also shows that the reactor pressure vessel of the Flamanville EPR, which is already installed, does not have a Certificate of Conformity issued by ASN. This means that it does not comply with the European Directive on Pressure Equipment, nor does it meet the mandatory requirement of the ASN, which since 2008, stipulates that any new nuclear reactor coolant circuit component has to have a Certificate of Conformity before its production commences.

“Without a Certificate of Conformity the reactor pressure vessel and steam generators currently installed in Flamanville 3 will almost certainly have to be scrapped”, said Roger Spautz, responsible for nuclear campaign at Greenpeace France.

The review, he added, ”reveals evidence that at the Creusot Forge plant, Areva did not have the technical qualifications required to meet exacting nuclear safety standards. The plant was not under effective control and therefore had not mastered the necessary procedures for maintaining the exacting standards for quality control in the manufacture of safety-critical nuclear components.”

Areva has now acknowledged that ineffective quality controls at le Creusot Forge were mainly responsible not only for the flaws in the Flamanvile 3 EPR, but across other operational nuclear power plans – and that the technical failures date back to 1965.

Moreover, ASN has indicated that in the nuclear components supply chain three examples of Counterfeit, Fraudulent and Substandard Items (CFSI) have occurred in the year ending 2015.

The recent ASN publication (24th September 2016) of a list of the NPPs affected by the AREVA anomalies and irregularities demonstrates that the phenomenon not only has reached alarming proportions but is continuing to grow under scrutiny.

The number of components affected by irregularities and installed in NPPs in operation increased by 50 in April 2016 from 33 to 83 by 24th September this year. Irregularities affecting the Flamanville EPR increased from two to 20 over the same period.

LA’s Review also relates these developments in France to the UK, specifically: the currently operating Sizewell B NPP in Suffolk; and the now contracted construction programme for the Hinkley Point C NPP.

Sizewell B which includes a number of components sourced from Le Creusot which need urgent examination and / or replacement in order to prevent unsafe operation. The fact that this could escape the UK’s nuclear regulators also indicates, says Large, that “the Office for Nuclear Regulation (ONR) did not delve deep enough into the situation as now revealed by ASN.”

As for For Hinkley Point C, it now appears inevitable that the Flamanville reactor will not be completeted by its target date of the end of 2020, indeed it may very well never be completed at all. Under the terms of agreement for the plant’s construction accepted by the European Commission, this would render the UK government unable to extend promised credit guarantees to HPC’s financial backers.

“Now that ASN has deprioritized efforts on the under-construction Flamanville 3 NPP because of its pressing urgency to evaluate the risk situation for the operating NPPs”, says Large, ”there is a greater likelihood that Flamanville 3 will not reach the deadline for operation and validation of its technology by the UK Credit Guarantee cut-off date of December 2020.”

Also at risk are the two EPRs that Areva and EDF are currently constructing at Taishan in China. These are now at the most advanced stage of any EPR projects in the world, however there are increasing fears that they contain faulty components.

The vessels and domes at Taishan were also supplied by Areva, and manufactured by the same process as that utilised by Le Creusot. It is suspected that Chinese nuclear regulators may have decided to overlook this problem and hope for the best. However if they discover that the steam generators, which along with the reactor vessels have already been installed, are also at risk of catastrophic failure, that might prove a risk too far – even for China.

The danger for EDF and Areva is that the massive commercial liabilities they may be accruing for faulty reactors supplied to third parties, together with the tens of billions of euros of capital write-downs for projects they have to abandon, and the loss of generation revenues due to plant outages, could easily exceed their entire market capitalisation.

In other words: for EDF, Areva, their shareholders and the entire French nuclear industry, the end really could be nigh.

Oliver Tickell is contributing editor at The Ecologist.

The original source of this article is The Ecologist
Copyright © Oliver Tickell, The Ecologist, 2016
http://www.globalresearch.ca/frances-nuclear-power-stations-at-risk-of-catastrophic-failure/5548593