Come January 1, Europe will start draining the last juice from the “Square.” Few gave noted the fact that cutting the power lines to de-energize Crimea nearly led to fatal consequences at the South Ukrainian nuclear power plant, which is located in the Mykolaiv region, – an accident on a Chernobyl scale. A miracle saved us all: workers at the station succeeded in a few hours to restore the electricity to the security system. [Nuclear power plants produce electricity, but they need a constant supply of it to avoid meltdown, as in Fukushima, for instance — tr.]

For nearly two years now Ukraine has been teetering on the brink of default, techno disaster, popular revolt. And every time that there is a miracle, and the dire predictions don’t come true, a cure is declared – a victory over Russia, over the elements with the unpredictable laws of nature, over the skeptics. But in the end – common sense.

Last winter was surprisingly warm. As if the one who is responsible for the top temperature, specifically decided to lull the already careless Ukrainian government. Today it is once again assuring the public: there is enough gas — unless there’s a problem.

And it may be right – if a miracle happens again. Experts also warn that if the miracles do not happen, and the temperature in the apartments can’t be maintained at least at + 14 ° C, a catastrophe is imminent. Pipes will burst; heat and electricity will go off-line. In response, experts are declared fear-mongering pessimists. After all, last year they said the same thing – they warned and frightened, backing up arguments with some tricky formulas incomprehensible to the ordinary Maidanists.[the Maidan coup d’etat members who overthrew the elected Ukrainian government and brought to power the current regime]

There is only one thing: for the power system go off line for decades, would need only a couple of weeks really severe frosts – lower than -15 – 20 ° C. At least at night.

Such cold weather is rare, but still it happens. This is what experts are always taking into account, because no one of them can confidently forecast, but a technological disaster in the middle of winter – is inevitably a tragedy with deadly outcomes. Therefore, the gas must be redundant and not “just enough.”

The lack of gas and coal can lead to accidents in which the entire metropolitan area will be without heat and light. Unfortunately, the amateurs in Kiev may well make a more global catastrophe whose consequences will impact not only the public, but residents of neighboring countries. We are talking about the atomic energy plant.

There are four of them in Ukraine – a total of 16 units. That is 16 potential nuclear bombs. Experts say that it’s thanks to a miracle that new Chernobyls haven’t yet happened.

Vasili Volga, Ukrainian politician and nuclear-energy specialist: “What happened when these, so to speak, “activists” brought down the power lines? Immediately the South Ukrainian nuclear power plant lost a huge amount of electricity, which the system has to have. According to the accounts of shift managers, the guys were on one millimeter away from an emergency. Only the dedicated work of the station staff prevented it.”

A state of emergency was miraculously avoided. But Kiev have provided us all with new problems connected with nuclear power. As Vasily Volga spelled out, the specific operation of nuclear power plants requires precise timing of preventive maintenance. Otherwise, every time there is a risk of accidents on the scale of Chernobyl. “As for the core of the nuclear reactor and all the systems and mechanisms that serve it, we just can’t say,” You know, we do not have money just now, and you work, the way you have, and we’re putting off scheduled preventive maintenance.”

“If it clearly states that the gasket in the main centrifugal pump should be changed after a year, then it should be changed after a year.” All the systems and mechanisms that are around Ukrainian nuclear reactors, are produced either in Ukraine or in Russia. Today, due to the rupture of relations, there have been huge time lapses, when scheduled preventive maintenance at nuclear power plants has not been carried out. They know about this in Kiev, but are silent about the problem, because in order to solve it, you have to call Moscow. Or they do not realize how dangerous it is to finance nuclear power on installments.

The eternal question of our Svidomy opponents is why we are so keenly interested in Ukrainian affairs, instead of dealing with our own problems, has a simple answer: because you’re close. Because your refugees are with us. Because thanks to Maidan our trade and economic relations, which made both our countries stronger, have been disrupted. Not to mention the friendship and kinship between our people. Finally, because your problems are directly linked to our own. After all, Kiev does not pay its debts and yet asks worldwide for offensive weapons.

It is understandable that systemic problems come up here and there – Ukraine has no money. However, there is one more miracle in Ukraine – for the second year it has managed to avoid a default. A fact the talking heads and the Kiev politicians proudly remind us of. Moreover, on December 8, the IMF decided that even a default can not be an obstacle to Ukraine getting more credit [!]. 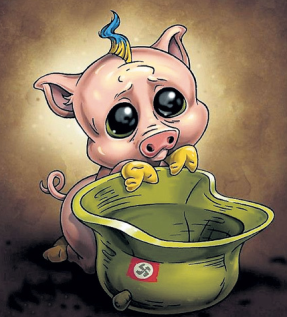 Neo-Nazi and far-right organizations and individuals are involved in the current Kiev government, in the military, and in the security forces.]

That is, the entire civilized world, led by the United States, has defended the winners of Maidan. Pessimists and “Moscalis” again notwithstanding. That’s where the real win lay. Let us, however, remember how many loans have been promised and how many have been issued: The European Union promised in 2015 to provide $1.8 billion., USA – $2 billion. Nearly one billion promised to other countries on a bilateral basis. From the IMF, Ukraine was to receive $10 billion. The World Bank has promised to lend $500 million for injection of gas into underground storage [just like in Los Angeles, where over 2000 residents have been evacuated due to leaking methane gas?], but recently began to doubt that this would happen.So actually this year, Ukraine has received less than half of the promised amounts, two tranches of 6.7 billion from the IMF. Catastrophically short. All other potential lenders under one pretext or another have not fulfilled promises.
No one is sure that Ukraine pays debts.[The Ukraine economy is in a state of collapse since the coup [3]]

However, the decision of the International Monetary Fund to continue the lending program says that global players will not desist until that unfortunate country undresses to the skin. Kiev will receive new loans so it can pay the old ones — weights hung around the neck of future Ukrainian generations.

“Square” optimists nailed it: declaring a default is not allowed. They will kill Ukraine. The problem can be solved only if nenka* learn how to produce and sell their products, filling the budget with the taxes of successful entrepreneurs and ordinary citizens. But there are practically no prospects.

From 1 January, 2016 a free trade area (FTA) will be in full force between Ukraine and the European Union. Where previously only Ukrainian duty-free goods were sold, now, the direction of trade changes – European goods crossing the Ukrainian border also will not be surrounded by cushioning duties.

To protect its market Russia will put up a customs barrier starting next year. Therefore, in Kiev, they very much expect compensation in Brussels. And Yatsenyuk’s regime has received signals that there will be compensation. We have heard rumors that the EU will allocate $ 600 million. Not much, but at least something.

However, recently the European Union dropped its promises. “We will say frankly, already since we agreed on an FTA, it was no secret that after the introduction, the Russian Federation could act in response, whether we like it or not. And there was plenty of time to prepare for this,” said the European Commissioner Johannes Khan, cynically.

The year and a half that the FTA has been acting in one direction – from east to west, has demonstrated very feeble opportunities for the Ukrainian economy. The miracle did not happen – trade with the West simply collapsed, and was not able to compensate for the loss of the Russian market.

And it’s not working, of course – it was not for this that the Ukrainians were lured to the Association Agreement, to lose money. Come January 1, Europe will begin to receive attachments back. As is customary in the civilized world, ten times over, sucking the last juices out of the colony.